Finding Our Way Through the Time of Waiting

Posted on February 9, 2020 by gracemorganwriter 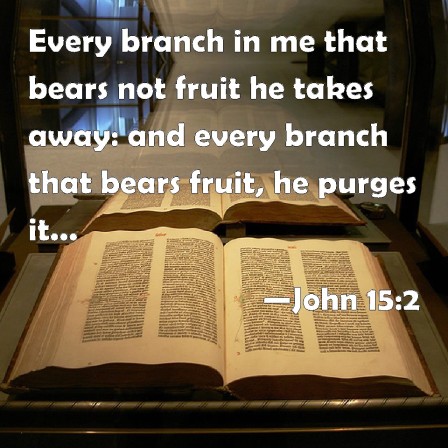 I am blessed. Knowing that I have everything that I need gives a peace that passes all understanding.  Unfortunately, not everyone will be able to reach that peace without much prayer. Over the years, I have learned that if I get too complacent and comfortable in the routine of it all, something will always come up that will cause me to be restless in my spirit.

It’s like a calm before a storm: no lightening or thunder is heard, but slowly the winds pick up and the sky darkens. You know that it’s on the way, only you don’t know when.

I can’t seem to wrap my mind around the ordeal of pruning, yet I know that after it is done, I begin to see new growth.

When we go through those seasons, it is time to pray. It is hard to let go, but sometimes the Lord is asking: “lovest thou me more than these?”

I know early on in my walk with God I was testing so many ideas about how I could find my place to serve, and it seem that the more I searched, the more frustrated I became, because it was important but not really what the Lord was leading me to. I opened so many doors of “opportunity” thinking that this must be the one which will be a good fit for me, and every time this happened, someone else seemed to swoop down and grab it, because maybe they were more qualified, younger, older, had seniority, knew the right people, or whatever else made them the best choice to fulfill MY vision.

Rather than allow myself to get discouraged, I resolved to just be the best at starting projects, and before I could experience the satisfaction of having completed something worthwhile and contributing: the project would be reassigned to someone else. I was a pioneer of sorts.

I worked at a place that still used a typewriter for most of their documents, and there was one computer that I considered basically obsolete. We’re talking about having to load up the hard drive using floppy disks. It wasn’t friendly, at all, but I had to use it. So to make the best of the situation, and learn enough of the IBM (yes, way back in time) to complete my work, I decided that the best way to practice learning the archaic programs I had to use, was to start a newsletter on my lunch break; thus the first Lattereign was written.

Every day, I prayed that the Lord would heal my temperamental computer, and it seemed that the more I prayed for a healing, the sicker that computer became, until one day, bless the Lord, the computer finally died. What a blessing that turned out to be, because it had to be replaced with a more up to date computer. I tried to control my sadness on that one. The power of prayer changed my circumstance, again.

If the Lord had not opened doors, I would have missed out on the next step in my journey to reach my full potential in him. It isn’t easy to let go, but when we learn to do so, the Lord takes us to a place where we can be fruitful. If I had been content, I would have never started the Lattereign, and my ministry would not have been brought to life.

I realize that through the years that the Lord has taken so many ambitions from me, only to allow me to thrive where he wants me to be. I couldn’t see it at the time, I’m still learning to let go. The word says in John 3:30, “He must increase, but I must decrease.” It also says, that he knows the plans that he has for me, that I might prosper and be in good health.” I must learn to trust him.

In this week’s Lattereign, we are invited to Receive From the Lord.

What is a writer? Someone who writes. For me, writing means to observe the world in a fresh way; it gives us encouragement when we are struggling to follow the path, and hope that we can keep pressing towards the mark. Writing gives us grace for the journey, and shines light into the darkened places of our soul.
View all posts by gracemorganwriter →
This entry was posted in Lattereign. Bookmark the permalink.